Fake gunfire was not what Hanna expected to hear when she arrived at JAARS as the Safety Coordinator Fellow.

Before arriving at JAARS, Hanna served in Uganda with IJM (International Justice Mission) in a safety and security role. There, Hanna worked with Hayley, who is now the Museum Curator Fellow at JAARS. Hayley had returned to the States while Hanna remained in Uganda. When Hayley tried recruiting Hanna for the January 2021 JAARS Fellows cohort, Hanna’s answer was a noncommittal, “I’ll think about it.” 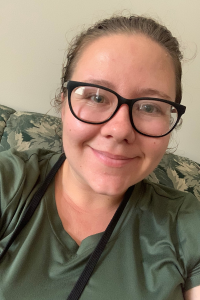 But when COVID-19 sent Hanna home early, Hayley suggested Hanna apply for the June 2020 cohort. So Hanna applied and began working at JAARS this past summer.

One of the first opportunities Hanna had as the Safety Coordinator Fellow was assisting with the Concilium training held at JAARS. Concilium is a Christian organization that empowers gospel workers to reach the nations by providing biblically-based, gospel-centered security training, strategic guidance, and human resources that allow Great Commission advance.

Thirty participants from about seven different mission-minded organizations came to the training held at the Townsend auditorium at JAARS with proper safety protocols. Hanna assisted the trainers in everything from printing materials to making sure the microphones worked.

She enjoyed observing how participants reacted in the simulations the trainers created for them. During an interrogation simulation, Hanna watched the person being interrogated, and thought the person should respond a certain way. “But I know that if I was in that position, I would not be responding that way because I would be so stressed and anxious.”

During a carjacking scenario, the trainers shot blank rounds into the air. One participant leapt up to run away. “But when you get up,” Hanna explained, “you’re standing right in the line of fire.” These fight-or-flight responses intrigued Hanna and made her want to study how the brain operates under duress.

Throughout the three and a half days of training, the trainers worked with the participants to ingrain important principles like OODA—Observe, Orient, Decide and Act—to help them think through difficult circumstances instead of just fighting or fleeing. Either action could have negative or dangerous consequences.

Although many of the scenarios were ones Hanna hadn’t faced before, she did recognize the government checkpoint simulation. Many times in Uganda police had pulled her car over to ask for proper registration and documents and even to search the vehicle. Thankfully, Hanna’s driver always knew what to say. But she knows just how real some of these events can be, and how important it is to prepare for them, wherever one serves.

This security training and her work at JAARS has expanded and deepened Hanna’s knowledge of what safety and security means in the context of missions. When she worked for IJM, she used to think safety and security were the same. However, she now realizes, “They are very different from each other.” Safety includes human negligence or environmental accidents, whereas security involves intentional human threats with motive and intent, much like the situations the Concilium training was preparing participants for.

Instead of driving Hanna away in fear from serving overseas again, this security training has actually inflamed her desire to return overseas—whether to Uganda or elsewhere. She would like to help mission workers overseas with safety and security because, as she says, “I want to make [serving overseas] better. I want to help people overseas with training.” Thanks to what she’s learned as a Fellow at JAARS, she’s several steps closer to knowing how to do that.

JAARS Fellows exists to come alongside the next generation and help them develop their God-given skills and gifts while they fill key roles at JAARS. Click here to learn more.