Posted on October 5, 2020 in Staff Spotlight

Speaking through the Heart Language

When Frank Doejaaren left Holland with his family for California, he didn’t know then if he would ever return. With his father’s business struggling in post-World War II Holland, the Doejaaren family left for the United States five years after the war, choosing warm, sunny California as their destination. Frank missed Dutch culture and speaking the Dutch language, but not the damp, rainy climate of Holland. 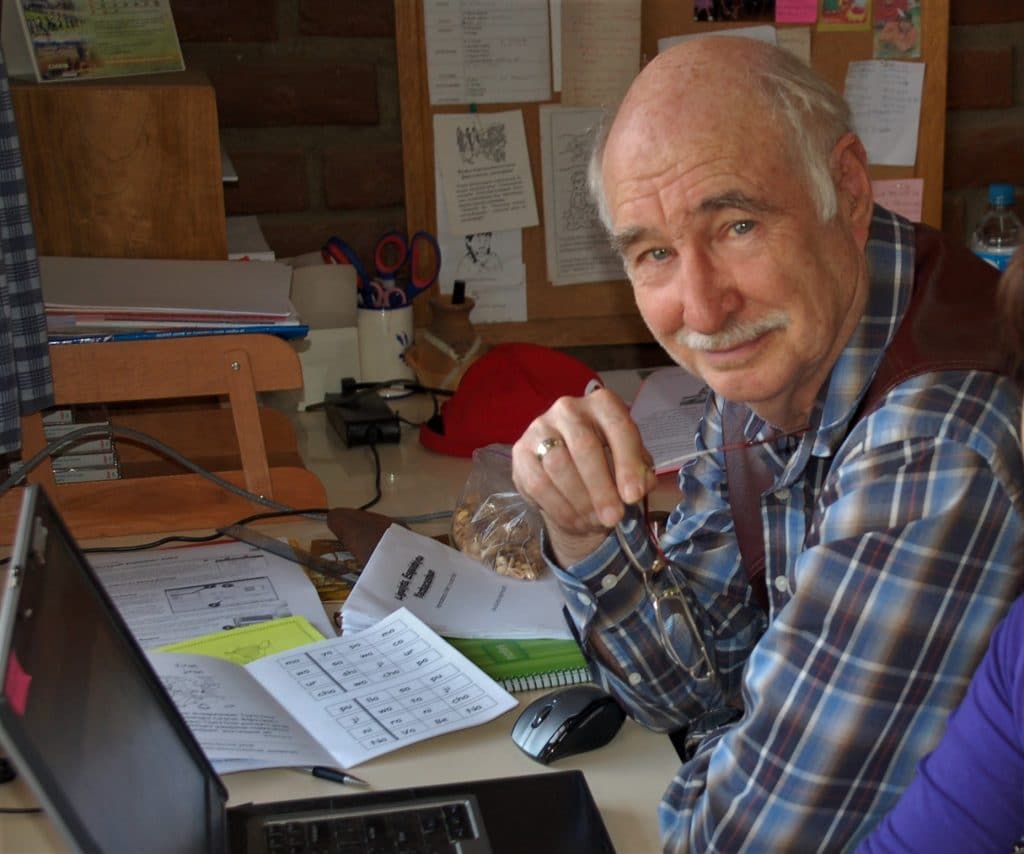 Surrounded by English-speaking classmates, he learned the language quickly. He didn’t know then that language would become the heart of his life’s work once he partnered with Wycliffe and SIL*, nor did he know the Lord.

God would use printing, Frank’s future occupation on the mission field, to bring him to faith. Before he became a believer, Frank found work helping an assistant pastor print the church bulletin each week. The consistent time spent over the printing press with someone who loved God softened Frank’s heart. One night, while working on the bulletin in the church office, Frank responded to the gospel and committed his life to Christ.

After becoming a believer, Frank was drawn to the mission field. He was particularly fascinated by Wycliffe’s work and decided to begin training in linguistics so he could be directly involved in Bible translation. But Frank soon discovered that his best opportunity to support the work of Bible translation was in a skillset he already had: printing. Frank was able to use his gift to print New Testaments and even manage a print shop. When he thinks of his years printing before he knew the Lord, Frank reflects with wonder: “I never knew that one day the Lord would use my printing skills.”

Yet Frank’s joy in his newfound faith and calling to the mission field was not shared by his family. Frank’s early witnessing attempts to his father, an agnostic, fell flat. While his father believed in God, he was not open to believing in Jesus’ miracles or hearing about the gospel. He and Frank’s mother struggled when Frank chose to go to the mission field with his wife and children. Frank’s parents delighted in his new wife and children, and it was hard for them to be so far from their grandchildren.

Frank had dreamed of living in Suriname, a Dutch-speaking country, and was overjoyed when God opened the door for him to move there. His years of living where his childhood-language was spoken are some of his fondest memories.

While Frank was serving overseas, his father suffered a stroke. His father still did not believe in the gospel, despite Frank’s prayers. God answered one of Frank’s prayers by healing his father from the stroke. But his father lost much of his skill in speaking English.

When Frank’s father had a second stroke, Frank continued to pray for physical and spiritual healing. His spiritual mentor gave him an idea: Frank should sit at his father’s bedside, reading verses from the New Testament in Dutch, the language his father had spoken as a child. Frank did this early one morning, praying earnestly that his father would accept Jesus as his Savior.

When Frank left his father’s side, his mother came to take his place and found her husband smiling with his eyes open. She told Frank later, “I don’t know what you told him, but Dad seemed really at peace.” When his father passed away that evening, it was with this new peace—a confirmation to Frank that his father had embraced the Lord at last. If asked, Frank says his confidence comes from this: “God speaks to the heart through the heart language.”

Frank now works in the photo library and archives at JAARS. He delights in speaking Dutch with fellow JAARS staff. But most of all, he is glad to be part of a ministry that helps share God’s Word with those who still need it in a language that speaks to their hearts. He knows personally the eternal value of this work.

You can also make an eternal impact in someone’s life! Find out where you might best fit at JAARS here.

*A partner organization of JAARS