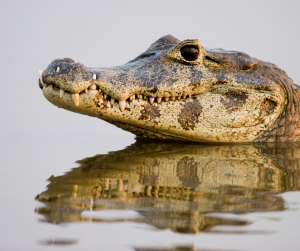 Alligators cruise the rivers looking for prey, ibis patrol the shallows for minnows, and rain pours across the flatlands, submerging the marshy grasses completely during the rainy months.

This is not the Florida Everglades, but the Pantanal in Western Brazil—an area of wetlands 10 times bigger than the Everglades. The villages of the B* language group tucked into this area are inaccessible three-fourths of the year except by river or air.

For many years, the B people used medical services offered by JAARS planes. The people knew the names of many JAARS pilots. They always referred to the distinctive JAARS Cessna 206 with the belly baggage pod as “our plane” and could distinguish the sound of its engine from that of the other planes in the area.

Without aviation, and the help of a newer plane—a Cessna 210—the B people likely never would have tasted the spiritual fruit of Bible translation. The medical service of a JAARS aircraft opened the way for this work to begin.

It began with a medical evacuation. In 1985, a young man in a B village had just been bitten by a rattlesnake. Keith traveled on the plane sent to transport the young man and his family to the city for emergency care. Keith had come to ask the B people if he could learn their language and culture in order to translate God’s Word.

While the village men carried the snakebite victim and his family to the JAARS plane Keith had arrived on, the rest of the village met to hear Keith’s proposal and discuss their response. They invited him on the spot to come translate.

After 35 years of waiting for a translation, the B people can now experience true healing in God’s Word with assistance from the only vehicle that could bring them his Word—an aircraft.

These audio recordings found their way to people’s hands via a Cessna 210 flown by our partner organization, Asas de Socorro. This plane had spent three months at JAARS in 2018, undergoing upgrades that enabled the plane to land safely on a runway that can lose several hundred feet from rising water.

The plane made it possible for spiritual healing to occur among the B people when the audio New Testaments, and later, the hard copies, arrived. At the time of the dedication, the road was under water, and to go out by river would take complicated logistics and two days to accomplish.

After so many years of toil, nothing excited Keith more than watching God heal people’s hearts through his Word. “There’s nothing that can compare!” he says. “For over 30 years we only saw a half dozen people decide to become followers of Jesus. In just the last year there have been 11. And more are interested. And they’re reaching out to their relatives in other villages.”

Although the B people may be forgotten and inaccessible to the world in their wetlands, God sees and loves them.

“A long time ago I saw other indigenous people listening to God’s Word in their own language,” Luciano, the leader of the new B church said. “And I thought that would never happen in my language. But now here it is: God’s word in my own language. It’s a dream come true.”

Praise God! People like you who give to our Aviation Solutions have helped make Luciano’s and other members of the B language group’s dream of possessing Scripture in their own language possible. Thank you!