Called to be a Donkey 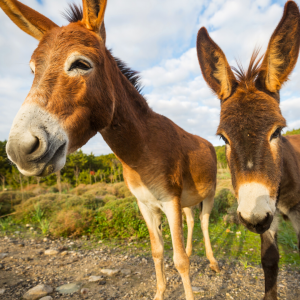 Like the donkey that faithfully, humbly carried the Savior of the world through Jerusalem toward his death, Mike and Inah Oak wish to humbly and faithfully serve the Lord wherever he leads them.

The couple had been talking about missions for decades but had never seriously considered serving overseas themselves. When a teacher at the Christian boarding school in New York where Inah taught told them about his service as a Wycliffe Bible translator in a closed country, the couple filed the information away for later thought.

During Inah’s tenth year at the school, she and Mike began to wonder what they would do next. One Sunday Mike attended church alone because Inah was unwell. At church, Mike felt God calling him to missions and saying, “Why not now?” Shaken to his core, Mike was brought to tears from the powerful encounter.

When Mike returned home, Inah could tell he had been crying. “What happened to you?” She asked.

Mike described what had occurred, and without even taking time to consider, she said, “Let’s do it.”

From this first time when they were called into mission work, Mike had a humble attitude: “If the Lord asked me to just sweep, then I’ll do it.” Eventually this attitude took form in the picture of a donkey obediently going where its master led.

Next Mike and Inah’s Master led them to Florida. Mike worked in Wycliffe’s headquarters as the IT director for a year and a half. Then, longing to be closer to the translation work, they moved to Papua New Guinea, where Mike served as a language program manager and Inah taught math to high school students at the international school. Mike enjoyed supporting Ilje Jung, the translator in charge of starting the translation for the Wampar people group. Mike also gathered a team to show the JESUS film in various villages while Inah prayed over the trips and team members.

After two years, the couple followed their Master back to the U.S. Inah had loved attending ICC (Intercultural Communication Course) at JAARS before they went overseas, and out of all the ministries, she enjoyed it most. She wanted to be part of the prayer-centered team.

So Mike and Inah moved to JAARS, where Inah joined ICC to facilitate discussion and prayer. For one of the courses, the leader of ICC asked her to join the prayer team instead of facilitating. “I thought that being a prayer person, which is more in the background than a table facilitator, was easier,” Inah recalls. “That was wrong. [Being a prayer person] was hard, and it drained my energy. But I loved it.”

Inah has enjoyed being part of the Learning and Development team which runs ICC. “I am so thankful, and I enjoy [this team] so much. Everything starts with prayer and they’re so connected with the Lord.”

While Inah was getting settled into her new role with ICC, Mike followed the Lord through several roles until the Lord led him in March to the JAARS Business and Technology team. “I’m trying to help wherever I can,” Mike says, “because there’s a lot of things going on at JAARS in [this department].”

God has taught Mike through all of his various jobs over the years that he can’t plan his own life; he needs to be more dependent on the Lord—like a donkey trodding wherever its Master directs. Throughout their lives and ministry, Mike and Inah have pictured and reminded themselves to be a donkey. It’s not the donkey’s job to jump up and ask where it’s going; if it does, its precious cargo could fall off. Instead, it keeps its head down and obeys its master, wherever he leads it.

Right now, Mike and Inah have followed their Master to a place that “feels like a community”—where the Lord is at work growing his kingdom.

There’s a place for you in this community too! Visit here to find it.